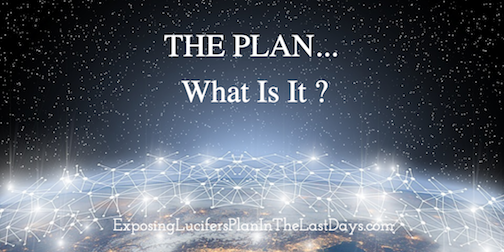 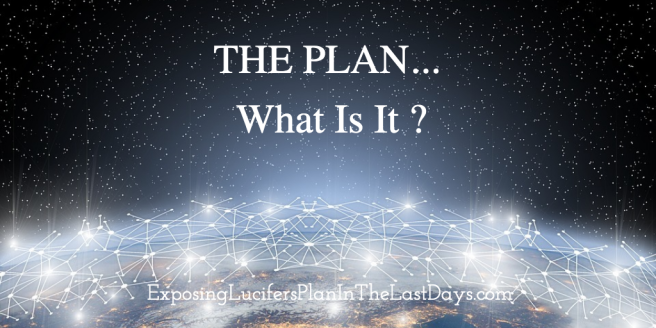 As with every other earthly organization, Satan’s organization (what I have termed “The Organization,” and what the Bible refers to as his “kingdom”) has a mission, goals (both long-term and short-term), and strategies implemented whereby those goals are achieved. There are long-term goals and short-term goals, but whichever goal is being worked on, every individual who works within Satan’s organization — not only the demonic, but also conscious and unconscious human workers — works together, as a team, to accomplish those goals in whatever way they have been assigned.

In other words, they don’t work haphazardly. They have A PLAN.

So, simply put, “The Plan” (thusly named and designed by Lucifer — Satan — and some of the fallen angels of his Spiritual Hierarchy), is the way that Satan and his fallen will accomplish the different goals they have set. It is a complex system of mapped-out deceptions — a conspiracy of mammoth proportions composed of many small conspiracies —  each carefully designed to slowly influence the masses over the years, step-by-step, to lead all religions into one New-Age, Luciferian (Satanic) “spirituality,” to the point where people will joyously embrace the planned new order of world government headed by Lucifer’s (Satan’s) chosen representative (world or global leader).

On this website, as well as on the website that I share with Loren Grace (https://carolynandloren.com/), I will do my best to give details and examples of Satan’s plan (“The Plan”).

The Main Goal of The Plan

The main goal of The Plan — the most important long term-goal — is to train people, through occult doctrines and techniques, to come into agreement with and enter into a false “unity,” also known as “Christ Consciousness” (as well as other similar terms), thinning the veil between the spirit world and the physical world, thereby paving the way for the false Christ to appear.

Ultimately, of course, this will cause Lucifer (Satan) to be ruler of this world.

⇒ Note: In the book I wrote with Loren Grace, “Doctrines of Demons: Exposing Christian Witchcraft,” we expressed this in the chapter titled “Goal of the Infiltrators within Charismatic Christianity.”

Although the chapter was primarily from the perspective of the charismatic movement, Satan’s (Lucifer’s) goal is the same, no matter what religious or spiritual values the individual holds.

Smaller Goals of The Plan

The smaller goals (and the strategies that are used to implement them) all serve to accomplish the larger goal. They are too many to write out (although, as I said, my websites are dedicated to exposing these goals and strategies), but they are divided into different world systems, each with their own subdivisions. Although there are likely more, the list of these world systems that many Christians may be familiar with have been made popular by Lance P. Wallnau and his Seven Mountain Mandate “theology,” also known as Dominionism, Kingdom Building, or the lesser-known Sheep Nations.

⇒ Note: Although it seems to me that this is a pretty complete list of the world systems that Satan is infiltrating and controlling, I would also probably add to this list “Sciences,” a world system that is more and more being tied into “Spirituality/Religion,” particularly in regards to “quantum or fractal spirituality,” an occult “theology” rooted in Emanationism/Gnosticism that an alarming number of Christians are now embracing.

It is the goal of Satan and his fallen to control each of these world systems, causing people to come into agreement with and into alignment with his overall plan of a “unity” (a false unity) that will pave the way for the false Christ, ultimately giving Satan full control of the earth.