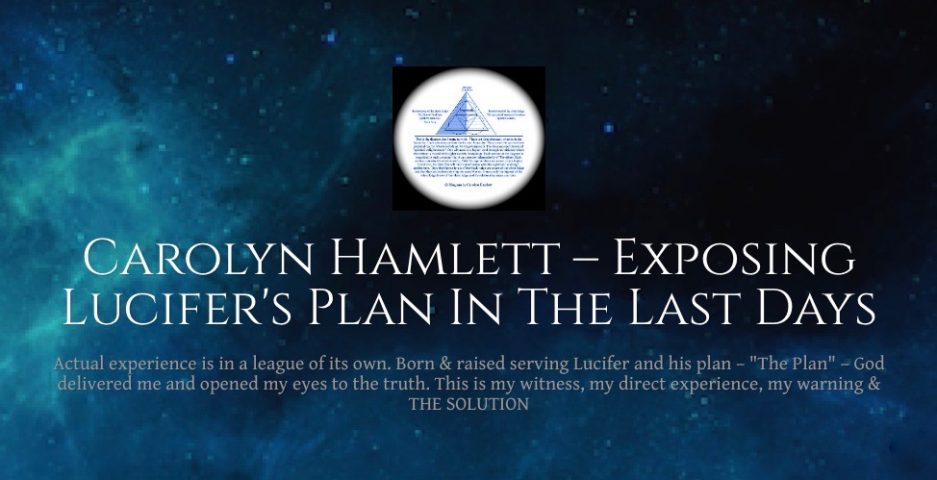 Throughout the years, since 1986, when I began sharing my testimony as a means to warn people of The Plan, I have used terms that people were familiar with at the time of my writing.

When I wrote this article in 2012, I used the common buzzwords, “globalist” (singular) and “globalists” (plural form) to describe a person or persons who are working to bring the nations of the world into a single world government or a “new world order.” Interesting to note, at that time, many people were not yet familiar with the term, “New World Order” and a fair number of those who had heard of the New World Order were convinced that such a thing was preposterous and a “conspiracy theory.”

Today, people are now becoming familiar with the term, “The Plan” and who the true authors of The Plan are. They are not mere men as the term “Illuminati” suggests, but much more sinister than most can imagine.

The planned world government is to be a marriage of politics and religion, the religion of Anti-Christ and the politics of Anti-Christ as One single system that will govern (rule over) the people of the world. We are rapidly heading that way, now that we have been duped into “following the leader”, allowing ourselves to be ruled by our “elected officials” who should be civil servants honoring and carrying out what WE the people want, not what the governing system wants.

One of the things today’s governing system wants is to disarm Americans.

The Shootings, The Globalists & Gun Control:
The 2nd Phase of Disarming American

The globalists know that an educated society armed with all the facts and the ability to rationally think and reason as individuals is a well-armed society that is not easily overtaken.

The globalists also know that such a society is wise enough and intelligent enough to realize that this is not a perfect world full of benevolent people that we live in, and that by disarming society as a whole from protecting itself from greedy, power-hungry people is an invitation for trouble, not the assurance of safety.

That is why the globalists have been working diligently through the last 50 years to dumb down and numb up Americans, which is the most crucial step towards fully disarming and ruling the masses with the least amount of resistance.

The problem is not the guns. The problem is that we are now an “Illuminati” controlled society that is reacting to mass programming.

Common sense is no longer common. Americans have been conditioned to take the spoon feeding of the globalists’ prepackaged opinions channeled through the globalist-run mainstream media, globalist-run Hollywood, movie industry and publishing houses.

We are an intellectually disarmed society, putty in the hands of the globalists and their agenda to further disarm us from physically protecting ourselves from them. It is one of the greatest conspiracies ever, and so successful that Americans just can’t see it to save their lives.

I speak from my experience of being born and raised in the globalist organization, knowing of this plan to take over America and bring America to ruin.

When I was a small child in the 1950’s, I knew these types of shootings would be happening just prior to the beginning of the planned chaos that the NWO organization would bring.

I also know that the globalist organization has been programming multitudes of individuals at least since the early 1950’s, to be triggered to help bring the chaos and to perpetuate the planned chaos in America and in other locations throughout the world. Many of these programmed people are what I call “sleepers” because they are totally unaware that they have been programmed. The programming is dormant until the inner clock is triggered which engages the program. I believe that the movie “Avatar” contains such triggers. I haven’t seen the Batman movie, so I don’t have a personal opinion about possible triggers in that movie, however, going by the headlines of some articles I have seen in my mailbox, it appears that some people are thinking that the Batman movie might have some triggers in it.

And don’t you know that the creators of the Batman movie are making a killing on the profits as a result of the recent media hype? Don’t you also know that the creators of the Zombie movies have also been making quite a killing? (Just a thought to factor into this whole equation.) The globalists are the biggest opportunists this planet has ever seen who play every avenue possible for their benefit.

The globalist aim to enact strict gun laws and to finally disarm Americans. This has been a target goal for many years. Until the globalist enact strict gun laws, Americans can expect to be seeing more shootings, not just in schools, but in other public places, like malls, parks, libraries, religious meeting places, possibly subways and even airports. Such “false flag” events were planned many many years ago in order to instill fear in Americans so that they would be more willing to disarm themselves rather than be forced by the globalist to disarm. As a last resort, firearms will be taken by force.

Keep in mind that if the globalists benefited by having Americans armed, then the globalists would be pulling off numerous “false flag” attacks in America that would be thwarted by well-armed citizens and of course be widely publicized. The fact is that there are many good, armed citizens whose quick thinking has saved many lives. The media could very easily use such numerous instances to encourage a responsible armed American public, if having Americans armed was advantageous to those governing us and passing our laws.

However, the fact is that gun ownership by American citizens is dangerous to our globalist run government.

Think about this: what solider would not fear entering a country where it is a known fact that most of its citizens are armed? Think about the power of the globalist-run mainstream media and how easily Americans could be influenced to support the benefits of having more guns rather than fewer armed citizens with their concealed weapons permits.

It is true that taking guns away will not stop the criminals, but it will stop Americans from protecting themselves against the criminals who will always have plenty of weapons.

The truth is that our government IS the terrorist organization that wants to take down America, and they need to disarm Americans first.

Their first step of disarming Americans has been successful in that we in America are no longer a thinking, reasoning society with all the facts. The next step is obvious.

A final point I wish for you all to consider —

Research all the laws that have been passed since September 11, 2001 and ask yourself what is keeping our globalist-run government from enforcing all those laws. The answer should also be quite obvious.